A Maremma Tuscany mine tour

I suspect that an underground tour of a Maremma mine in Tuscany won't be the first thing that comes to most peoples minds when they are searching on the internet for tours in Tuscany. But, don't you think life is too short to be following an umbrella around streets with fifty other people? And doesn't an opportunity to visit a place that not many people ever have, or will, in a part of Tuscany you didn't know existed in the first place, sound just that bit more memorable and exciting?

And this one is great for children too... 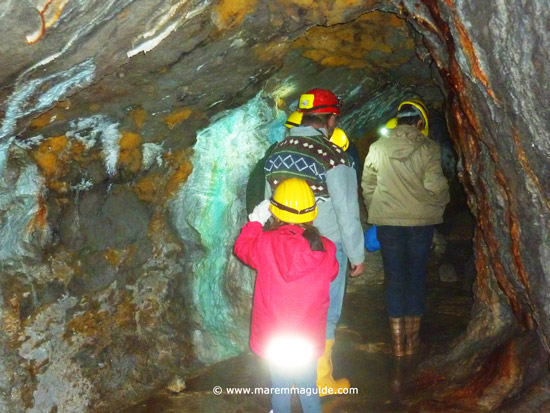 NOTE: If the idea of wearing Wellington boots to do so puts you straight off, don't read on! Click back to the main tours menu for some more 'usual' and great tour options :)

A little bit of history

The entrance to the galleria Guilia is located exactly in the triangle of land at the confluence of two fast flowing streams - the Rio di Rigalloro and the Rio delle Tane. You'll need to cross one of them. 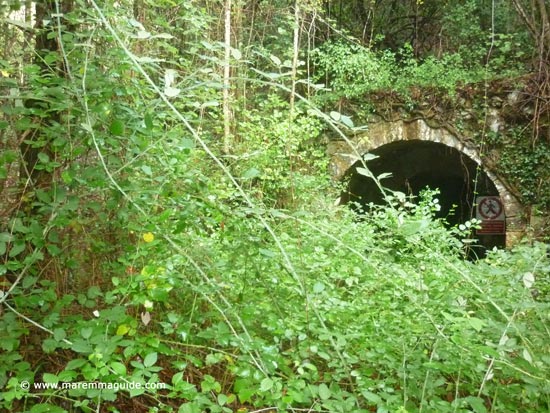 The amount of water and mud on the floor of the tunnel prevented the potholing group members from entering very far on the day they first discovered it, but they returned a week later armed with "stivali di gomma" (Wellington boots) and were able to explore its depths.

The tunnels were originally test excavations carved out in the beginning of 1900. They extend to about 400 metres in total over three levels, but only one tunnel is unflooded and accessible at the current time.

In 2007 when the potholing group found them they were in the same condition in which the miners had left them on the day of the closure of the mine. They have since, however, been accessed by mineral hunters who have removed specimens and even taken to using explosives to do so in places... "percato" (pity).

Worryingly, is that they have also installed tubes for a water extraction pump to access the flooded lower level of the mine. And in doing so put themselves at considerable risk when entering the tunnels, as it has been the pressure of the water that has held much of them in place so far. 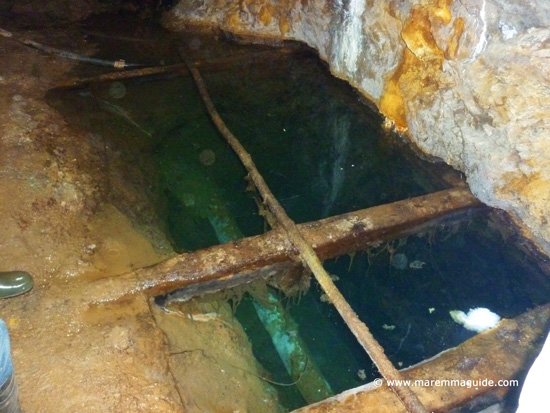 Flooded lower level of the mine. Watch your step! the path is slippery and narrow alongside.

At a crossroads not far inside you will find on the your right the access to further tunnels, both below and above. And at the end of the gallery to the left is a small pond where a fresh water "fonte" - spring - surfaces. If you are lucky, it is here that you might spot a long-legged local inhabitant that, at first sight, looks like a huge spider swimming, but isn't - (phew! I don't like spiders!) 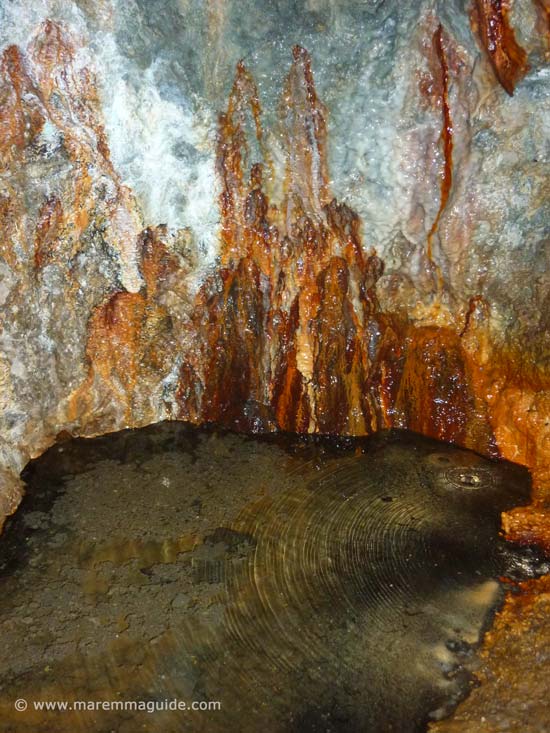 The minerals you can see

The minerals you can readily see in this mine include calcareous dripping stalactites and the beginning onion-like layers of satalgmites on the floors of the galleries. 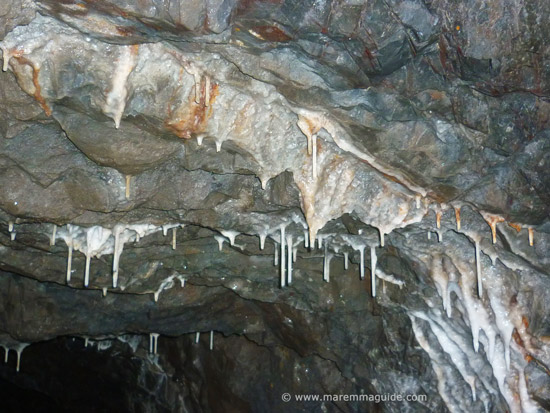 The discoloration of the calcite formations down the walls of the tunnels are from the other minerals in solution in the waters of these lovely mettalliferous hills: the bright blue from copper, brown from iron, and yellow from the iron ore limonite. 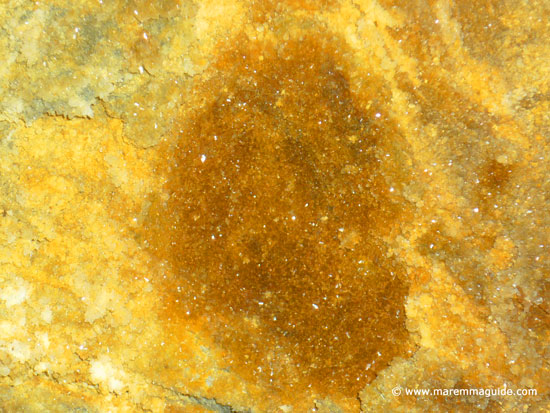 The black coloration of the shallow pools next to the freshwater pool is from lead ("piombo") in solution deposited on the gallery floor. 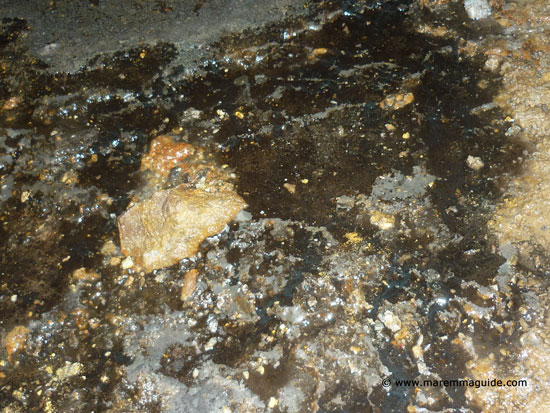 The potholers have also explored a neighbouring mine further up the hillside, called Galleria Teresa, the mine tunnels of which are home to mineral specimens much richer in quality than at Galleria Giulia. You can visit that too with them!

The wildlife inside the mine 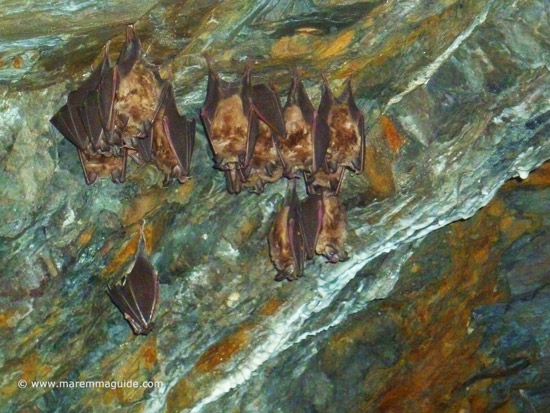 The mine shafts are home to a colony of "pipistrelli" (bats), of which the largest numbers are to be found in the very end of the tunnels (which the tour does not disturb). There, the extensive mud on the floor isn't mud, but pure guano!

You can also spot a "grillo" (cricket) or two in the pool or on the walls. These, in fact, belong to the orthopteran family Rhaphidophoridae and are cave weta. 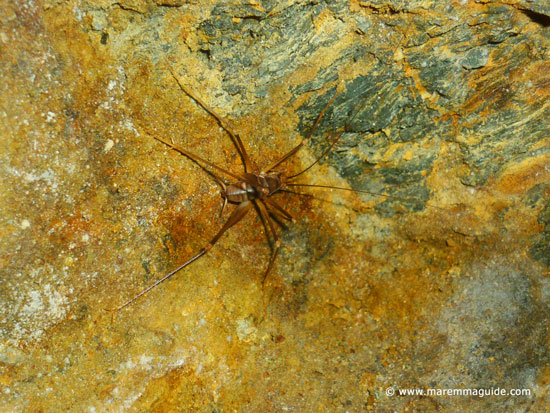 And if you have keen eyes, you can spot their pretty crystal their calcified remains as well.... 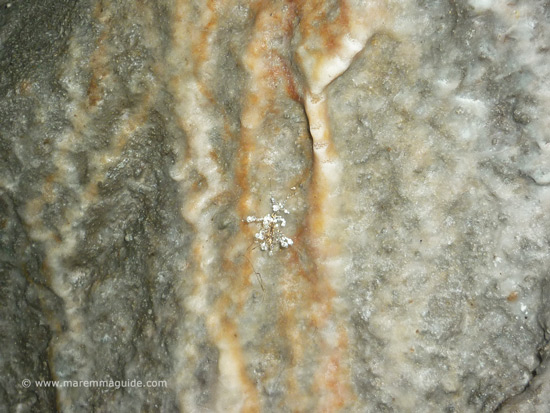 How to take the tour 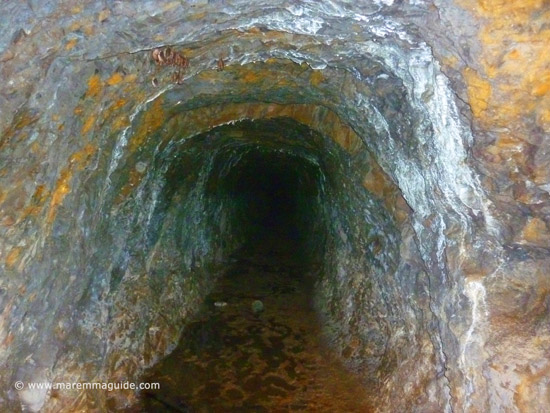 You can take a tour like I did - for free - once a year in November as part of the wonderful month of events of the Novembre Grosso festival in Massa Marittima. You will need to book in advance for this tour and it is best to do so as soon as you can as the numbers are strictly limited: it was very popular this year - the first year of the festival.

The Novembre Grosso event website can be found at www.novembregrosso.it. The telephone number for bookings is +39 0566 902289.

Or, also free, as part of the annual "Passeggiate fra Storia e Natura" (a walk between story and nature) events organised by the Musei di Massa Marittima and the Cooperativa della Colline Metallifere - which, this year, also included a guided tour of the Galleria Teresa mine.

Alternatively, you can arrange a private tour with the same potholers who lead the Novembre Grosso event - members of the Gruppo Speleologico Massa Marittima G.S.M.M.

Maremma › Maremma Tours › A Tuscany mine tour with potholers