There are only nineteen snakes in Italy, so if you are planning a vacation trip and are feeling a little anxious about the snake population that you might come across, don't be. Most of these snakes would prefer to avoid you! And will take steps to do so. And only four of them - all of them vipers - are poisonous. And only one of those is "common" in the sense that it can be found all over Italy, whereas the others are rarer finds.

Mating in May sunshine...

The topic of what kind of snakes live in Italy came up but not long after I moved to Maremma, as a consequence of our next door neighbour finding one large one curled-up in her post box one day.

Ever since I have always opened our box with great care especially during the warmer spring, summer and autumn days, before putting my hand in to extract the post.

And that same week as we were walking in the woodlands around the Lago dell'Accesa my partner spotted the head of a Viper poking out from under a rock slab of an Etruscan tomb.

At which point he freaked me out somewhat (I have to admit it, I'm afraid of them) by informing our family party that it was best not to walk in the macchia and woodlands in September as this is the month that vipers give birth and lay along over hanging branches under which you walk... I have since opted for walks along the beaches in September.

So I decided to find out some more...

Serpente in Italia - Snakes in Italy

There are two families of snake in Italy each with its own species. For those of you doing your school homework research or with a passion for snakes like my Italian partner I've listed them all with their Latin scientific names as well as their common Italian and English names. And if you need the precise nomenclature or want enough reading material to keep you occupied into the early hours, the online Wikipedia is a great resource for detailed information about each (I've put the information for a good starting page at the bottom of this one).

The snakes... (I'm going to try hard not to sound like an encyclopedia!)

Unless you are looking at a Viper during your trip to Italy, the snakes that you will see all belong to the large Colubridae family (generally considered a non-amalgamous collection of snakes that have yet to be classified better) of which three sub-families exist here: the Colubrinae, the Natricinae and the Psammophiinae.

As a general description, these snakes average in length from between 100 cm to 200 cm, have a distinct head and large eyes. They eat their prey alive or after suffocating them in their coils. OK, enough information!

There are fifteen of them in all in Italy - and at the risk of repeating myself, for those of you who are nervous about the thought of meeting one - all of them non-poisonous.

The Colubridae snakes in Italy:

Two that you will most commonly come across in Maremma are the the Grass Snake and the Green Whip Snake. 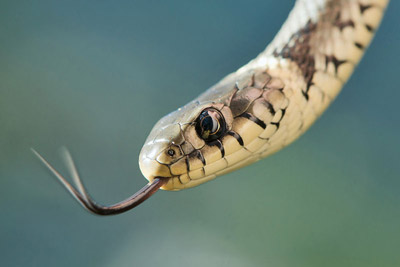 Also featuring in the photograph at the top of this page, the Grass Snake is a protected species in Maremma in Tuscany.

Although it can vary considerably in colour, in Maremma it tends to be a grey-green colour with four longitudinal rows of dark spots down its body and a characteristic yellow collar behind its head - hence its name in Italian of Natrice dal collare, "collare" meaning collar. Two dark spots develop on the sides of its neck when it reaches adulthood.

The adult females are much longer than their male counterparts, growing to an average 120 cm in length compared to 70 cm. But both have been known to reach much longer lengths.

The Grassa Snake is a semi-aquatica species that frequents all fresh water environments. It is an excellent swimmer and can remain under water without breathing for more than thirty minutes. And it moves quickly across terrain.

It is a diurnal animal, hunting both aquatic and terrestrial prey during the morning and late afternoon. The young feed on molluscs, insects, tadpoles, and newt larvae, whilst the adults eat newts, frogs and toads, salamanders, fish, small rodents, lizards and nestlings.

From autumn to late winter it takes refuge in burrows in the soil and in the cavities of tree trunks.

It is the most common snake in Europe and readily frequents environments inhabited by man. So you may spot one around your holiday home! But it is compeltely harmless. If you annoy or irritate it it will pretend to be dead while emitting foul smelling secretions. So I wouldn't!

A light, sturdy and thin bodied fast moving snake, the Green Whip Snake is commonly known as a racer. In Italy it is also known as the "miroldo" or "milordo" for its elegant livery and as "scaebonas" in the foothills of the Emilian Appennines, "frustone" in central Italy, and "mirauda" in Piedmont.

It has quite a small head, reaches between 80 to 100 cm in length, and is a white-yellow colour with green-brown transverse bands on the first half of its trunk, changing to longitudinal bands on the second half. But they can also be black. In Maremma it is possible to find almost totally black or very dark individuals.

Normally living in forests and bushes, frequenting sunny locations such as open woods, rocks, roads, trails and the banks of water courses. It is very fast and agile - reaching speeds of up to 11 km per hour, a good swimmer and able to climb on vegetation.

Hunting by sight its prey includes lizards, small mammals, other snakes and birds and occasionally dives for fish. But all does not always go to plan, as the Green Whip Snake frequently struggles with some of its larger prey and ends up becoming their meal!

From autumn to the end of winter it takes refuge in burrows in the ground.

It is harmless to humans, but when disturbed it will put on a very aggressive show and dispense rapid bites.

The Poisonous Snakes in Italy -
The Viperidi

Four species of Vipers from the Viperidi family are the poisonous snakes in Italy. Depending on where you are travelling, if you do come across one it is more than likely to be the Common Viper - called the "Vipera comune" in Italian.

For those who know their snakes, they are readily distinguishable from other snakes in Italy by their larger and triangular shaped head, shorter fatter body, and a clearly distinct short tail (which the Colubridae snakes do not have).

The Viperidi snakes in Italy:

Typically nocturnal, they normally ambush their prey and are capable of deciding how much venom to inject in their bites. Which in a defensive strike are more like stabs. Sometimes choosing with larger non-prey animals that they consider to be a threat - such as humans - to bite dry.

Take a Viper bite or suspected Viper bite seriously. If you are unfortunate enough to be bitten by one, or think you have been, then an urgent visit to "Pronto Socorso" - the Accident and Emergency department of a hospital - for an anti-venom shot and attention is essential. Every persons reaction to a bite is different, and serious complications and occasionally death from a Viper in Italy can occur.

The Common Viper normally grow to about 60 to 65 cm in length and has a slightly upturned nose and vertically elliptical pupils. Depending upon its natural habitat, its colouring varies from light grey to reddish-brown and it can be decorated with zig-zags, spots, or be of uniform colour.

Stout and sluggish in appearance, its lightening reaction will surprise you if you accidently step on or disturb it. But it is not an aggressive snake, prefering to run away and hide.

It lives in cool and sunny places, preferring areas with poor vegetation, meadows, pastures and especially rocks. Like all reptiles, the Viper is a cold-blooded animal, hibernating during the winter in crevices in the soil, and only becoming active when the soil temperature reaches 25 to 27 degrees.

Its venom is produced by special glands located near the ear of its upper jaw and is injected in its prey - mice, lizards and birds - through a pair of long hollow fangs.

Six to eight off spring are usually produced at a time, hatching inside their mother before being born fully formed.

When is a snake not a snake? When it is a lizard. And two lizards in Italy are commonly mistaken for snakes: the Slow Worm or Blind Worm - Orbettino, Anguis fragilis, and the European Legless Lizard or Scheltopusik - Pseudopo europeo, Pseudopus apodus.

The Orbettino is the one you will probably see in the grasses in Maremma or in your Tuscany villa garden.

Although the Orbettino is a reptile that looks like a snake, it can be distinguished from one by the fact that it has eyelids that blink and visible ears. It also sheds its skin in patches like other lizards, rather than as a whole skin like snakes.

It grows to about about 50 cm long, is brown or gray, and spread throughout Italy, living in an environment rich in vegetation and in damp humid places. It doesn't need much heat and so stays for most of the day in holes, under rocks or in a decaying tree trunk, coming out during early morning or dusk to feed.

The Slow Worm feeds upon a great quantity of slugs, but also small mammals, bird eggs, insects and earthworms. To get rid of the mucus after eating slugs it rubs its nose on the ground.

It can break its tail vertebrae in half loosing up to sixty per cent of its body (autotomize) in order to escape the jaws of a predator. And is ovoviviparous in that the female gives birth to already formed live young.

It is an exceptionanly long lived animal and can live up to 50 years of age.

If you would like lots of detailed information about each of these snakes, then Wikipedia website is an excellent online resource. A good starting point is this page: http://it.wikipedia.org/wiki/Rettili_in_Italia.