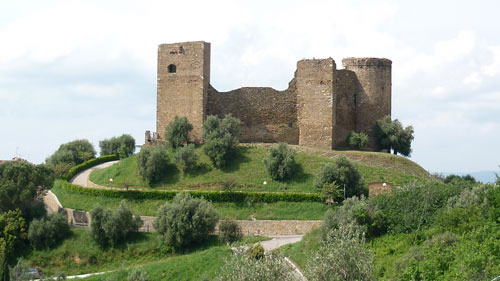 There is already a page in this Maremma Guide about La Rocca Pisana or Scarlino Castle, which you can find via the Castello di Scarlino link at the bottom of this page. But I am writing this second one as well as during a recent visit - the castle is one of my favourite peaceful places to sit and stare at the beauty of Maremma - the inside of La Rocca Pisana was open (every time I have visited before over the last few years it has been closed) and now I have some more information and photographs.

The history of La Rocca Pisana 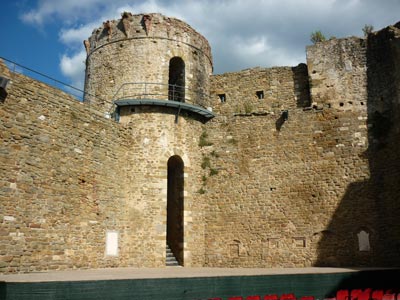 "The eastern end of the plateau, the first we encounter coming from the road, is still dominated by the impressiveness of the military fortress, originally built between the end of XIII and XIV begining of the century. And that has suffered successive changes until the fifteenth century. Its area, however, revealed through the excavations the existence of the oldest structures below the current passing through the centuries until the first settlement of Scarlino, dated to the late Bronze Age.

In this portion if the hill, in fact, were found the main archaeological traces of the protohistoric village (XII-X century BC) of archaic-Etruscan presence (seventh-sixth century BC) and the Etruscan fortress of the Hellenistic age (fourth century BC): in particular were found the remains of mighty defensive walls and quadrilateral interior housing, a cistern for water supply, and wells and tanks for the containment of liquids and food.

The gradual abandonment of these structures born for defensive needs is linked to the imminent Roman conquest of Etruria, from the second century BC, after the complete Romanization of the territory, the population was distributed mainly in lowland areas below. As for the rest of the plateau, even in this area, the ruins of the Hellenistic fortress showed traces of reuse both during the Roman period that in the first centuries of Middle Ages, when the collapse of rock was used as base for new huts built with wood and mud.

Starting from the ninth century AD, in the heart of what then becomes the courtyard of the fortress was built one of the houses that form the "curtense" village and then the first castle of Scarlino, surrounded by a first real wall: in the latter case were found remains of some walls in stone and wood, with a hearth supported directly on the floor if the land.

Towards the end of the twelfth century in this portion of the plateau is built the first great medieval building, an imposing stone building with noble characters, consists of a rectangular plan and mighty walls in the Romanesque style, with squared stones and the use of mortar as a binder. 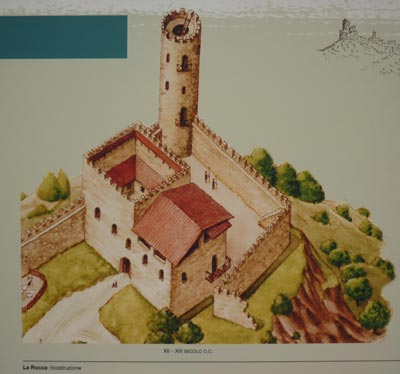 Among the new works XII-XIII century is also building a new church and two large buildings on the sides of the hill which involved the dismantling of the old boundary wall. This is replaced by a new building that this time seems not only surrounded the top of the hill but developed along the slopes of the hill, where was already built an early form of inhabited village: the new town planning also confirmed by the remains of a road in stone, which from the noble building led down along the side. A few meters away to the west of this road was the second noble building of the castle of Romanesque, characterized by a rectangular structure and probably a tower development, with a floor covered with slabs of stone.

Almost all these buildings show traces of abandonment in the second half of the thirteenth century, when the historical and political context of the area was characterized by conflicts between Pisa and other centers of the territory; at the end of the thirteenth century noble buildings of "Cassero" were in ruins and destined to dismantling. At this moment, in fact, or in the early fourteenth century, we can date the start of the construction of a military fortress by the city of Pisa, that in this area of the plateau placed the center of its construction project.

The old Romanesque building was completely knocked down and its stones were reused to build the new fortress, a pentagonal sub-structure with a square on the main front. The perimeter walls of the new building include a much wider area, which connects directly to the previous boundary wall, restored and raised. A new wall was built on the eastern side, that at about the half of its length presents outside a powerful triangular spur, and then bend southward where was built a new quadrangular tower. Opposite the entrance to the fortress, consisting of an avant-masonry, stood the big construction site, characterized by housing structures for workers employed on the site.

The rest of the plateau did not return significant traces of life, formed mostly by re-building the remains of some previous buildings precariously restored. 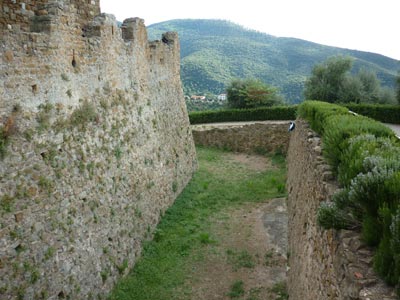 By now the main center of the plateau is the military fortress, which contrasts on the opposite side, the building of the church, which continues to perform ite cemetery area function of the village below. These are the only buildings that in the XV are restored by the family of Appiano, when they buy from Pisa the rights of the castle of Scarlino. In particular were restored the interiors of the fortress, was built a second wall around the previous fortification and outside of it was dug a deep ditch. Even today a bridge in wood and iron is the link between the ancient fortified center with the rest of the plateau. 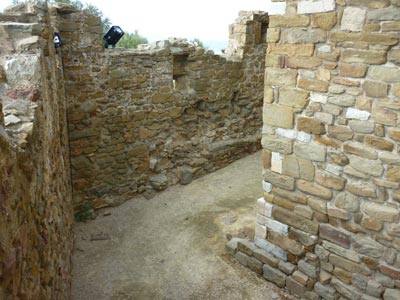 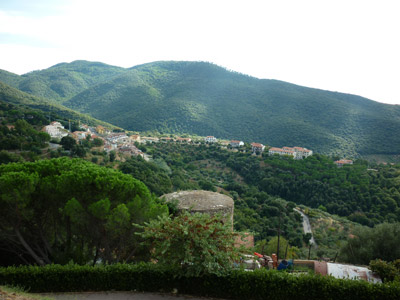 The grounds of the castle are open throughout the year and well worth a visit for the wonderful birds-eye views that they offer of the medieval town of Scarlino below and the 360 degree panoramic views of Maremma. Entrance is free.

The Rocca Pisana itself is open:

To view more photographs and read more about the castle and its ancient medieval church in which 100 solid gold coins were discovered hidden in a wall... and find out how to get there, the museum and the festival etc, click on this Castello di Scarlino link.

La Rocca Pisana is also the location for theatrical performances and events throughout the year. To find out if there is a show or festival when you are planning on visiting the area, go to the Maremma events page.

This Maremma bed and breakfast is simply one of the best and perfect for a romantic getaway that will have you feeling at home as you walk barefoot on its thick-piled lawn with a glass of chilled local Tuscany wine in your hand and stir the embers of the barbecue ready for dinner. 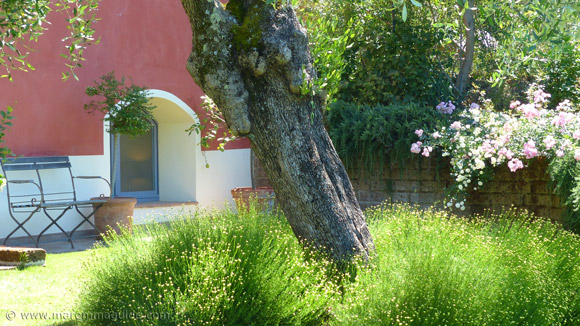