The Monastery of San Bruzio

There is very little left of the eleventh century monastery of San Bruzio near Magliano in Toscana, but the location of its ruin is such a tranquil place that it is hard not to ponder whether the monks who lived there experienced a serene life a thousand years ago or whether, set in beautful Maremma countryside or not, it was a completely different affair. Scarce information exists about the "monastero" to tell one way or the other. 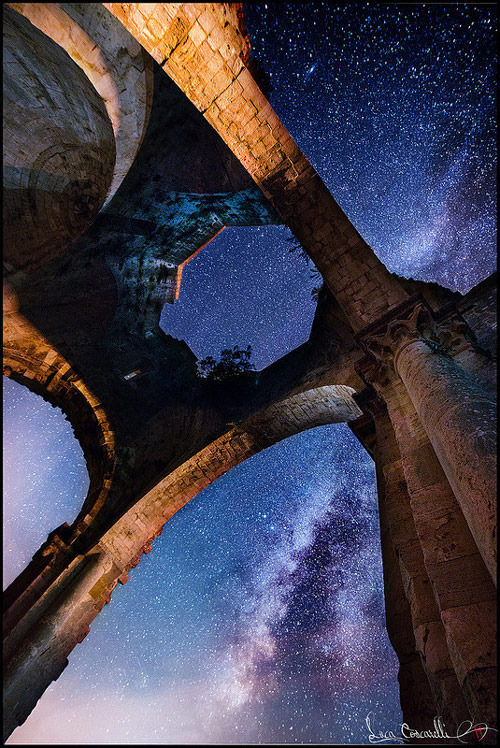 San Bruzio at night: I love this photo - thanks Luca Coscarelli :)

The History of the Monastery of San Bruzio 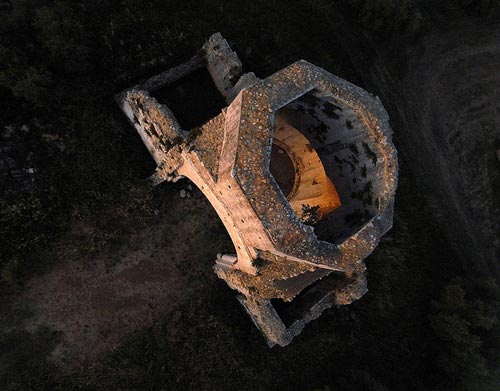 The Sentieristica della Provincia di Grosseto for the Chiesa di S. Bruzio (confusingly placed alongside the road north out of Magliano in Toscana to Pereta and Scansano - and not the road south that you need to take - see below) tells that: 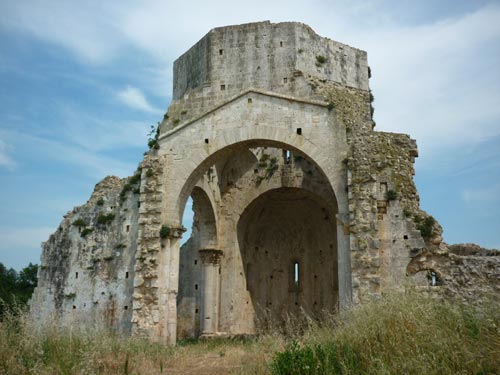 We know that the original structure was an important and fine one in the form of a Latin cross. What remains today are the walls of the transept, the apse and the eastern arches supporting the cupola. 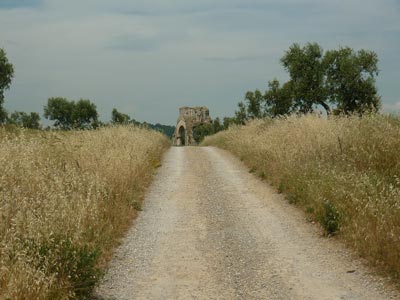 You will find San Bruzio along the road from Magliano in Toscana to Marsiliana. Once you head south from Magliano in Toscana and take the left-hand exit to Marsiliana, you cannot miss it as the ruin is set rather beautifully in fields within the centre of your view as you turn a curve onto a straight. And from then onwards you will catch glimpses until you reach the (easy to miss) entrance turning on your left.

If the car park directly on the opposite side of the road to entrance lane is closed (it was in May when I visited and very overgrown) then be aware that there is no option of parking close by along the main road, that the initial part of the lane is very uneven (watch those sumps!) and that the lane ends at the monastery where there is only sufficient space for parking a maximum of about three cars. 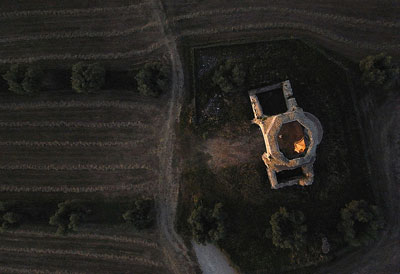 The kite aerial image near the top of the page and the one above are by kind permission of Opaxir.

If you have children with you... 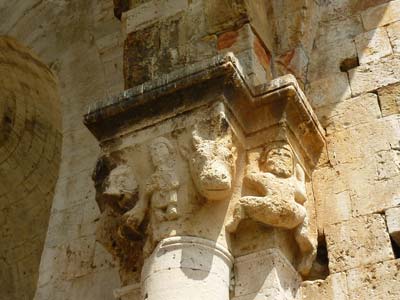 Unless your toddlers or younger children have a passion for medieval religious architecture, apart from the carving of a man with his bottom in the air and his head turned a 180 degrees on one of the columns, and, if you visit in the spring the rather spooky sounds as you enter the presbitery (upon investigation by this brave woman I can report that they turned out to be coming from a nest of baby chicks in the wall!), be prepared that there isn't anything at the ruin to keep them amused.

And the site is fenced for the most part and surrounded by farmers fields of grain and olive trees which, understandably, you are not permitted to walk or play in so there isn't the possibility of exploring any further.

BUT, do visit. For the short trip from Magliano in Toscana that it takes to reach it, from your first glimpse it will capture your imagination as to the impressive structure it must have been at its height. And the peace and tranquility which now surrounds cannot help but leave you pondering whether life there offered some reprease from the troubles and cruel living in medieval Maremma, or perhaps came with its own miseries...

In any event, the ruin is a beautiful and very peaceful spot to just sit and relax. The retired couple from Bulgaria who I met there were doing just that: sat in the shade under the only tree there with their faithful dog just as they had done the year before and the year before that. Special places don't have to have bells and whistles and in Maremma there are many.