These Bugatti car pics were taken during the Bugatti 100 years anniversary celebrations in Tuscany. In the stunning medieval centre of the hill town of Massa Marittima on the afternoon of 28 May 2009. With its beautiful Piazza Garibaldi and cathedral as the backdrop. 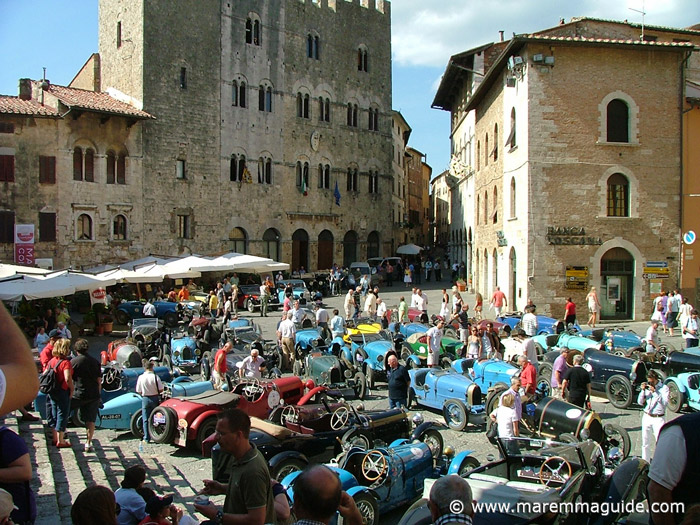 It was a truly wonderful spectacle.

"A Bugatti museum on the roads of Maremma" 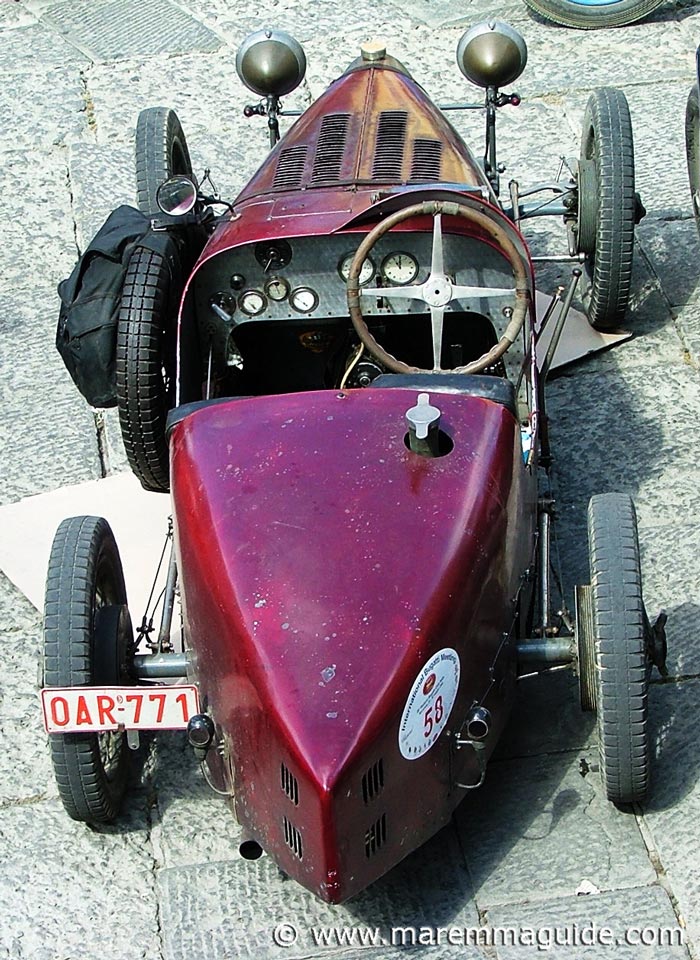 For three days in May 2009, as a celebration of the 100 years anniversary of the founding of the Bugatti company in 1909 in Alsace, Germany by Signor Ettore Bugatti, Maremma (and island of Isola d'Elba) became the only place in the world where it was possible to admire together more than 30 different Bugatti car models and 130 different Bugatti classic cars.

It was an unrepeatable and unique opportunity.

The publicity for the event read:

"This will be the largest Bugatti meeting ever to be organized worldwide, with classic cars taking part in it coming from 18 different countries.

These engineering masterpieces will be joined by their modern descendants, the Veyron GS, that will be setting their imposing tyres on Italian roads for the first time.

When the time came to draw a map of the route for the BUGATTI INTERNATIONAL MEETING, at Bugatti Club Italia – founded in Milan, where Ettore Arco Isidoro Bugatti was born – they never had any doubts: no other Italian region like Maremma could offer the perfect combination of locations of great charm and roads that seem to be designed to guarantee a pleasurable drive through natural sceneries, alternating dense forests by the sea, hills with century old vineyards, plains covered in olive trees and sunflowers.

Along this inebriating route, Bugattistes will take advantage of stopovers in medieval villages, old cathedrals, monasteries, private villas and castles where they will enjoy snacks based on top quality local products while soaking up that particular atmosphere, half-way between sporty and informal, yet exclusive, that characterizes the most authentic “Bugatti Style”.

It is no coincidence that Maremma – one of the least populated areas of the peninsula - is the first Italian destination, listed in 11th position, on the chart drawn up by the New York Times concerning the top 44 destinations to visit worldwide." Extract from the official press release for the Bugatti International Meeting 2009.

People came from miles around to stop and admire, chat and dream. Often, when empassioned enthusiasts come together, something special happens that touches all who take part and leaves lasting memories. May 2009 in Maremma was no exception. 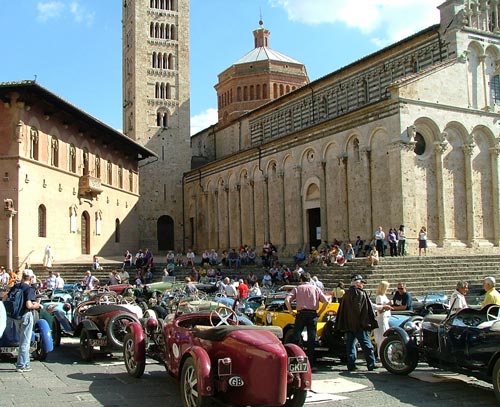 Almost all of the Bugatti car models ever made signed with the unturned E and B Bugatti logo - the designer Ettore Bugatti's initials - and the the famous horse shoe-shaped radiator took part in the event, to form what was described as an open-air museum.

From, "competition voiturettes belonging to the early decades of the last century, to the incomparable Grand Prix, from essential two seat sports cars to cars that were the epitome of technology and luxury in those years." Extract from the official press release for the Bugatti International Meeting 2009. 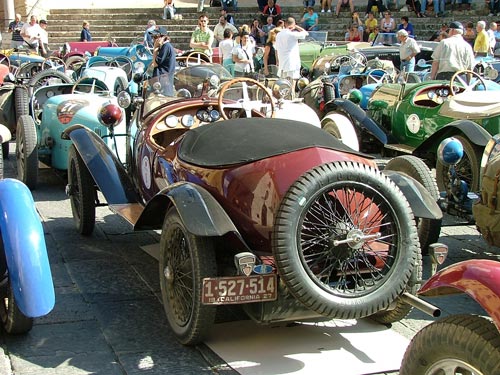 I'm not a car enthusiast, but to have seen so many wonderful old cars restored and tended to with evident passion, on a gloriously warm and sunny afternoon in Maremma, Tuscany, and in particular with the historic centre of medieval Massa Marittima as the background setting, was a real treat.

To hear them arrive and similarly to watch their preparations to leave assisted by fellow enthusiasts and adoring onlookers, was a special experience.

The Piazza Garibaldi in Massa Marittima is host to some wonderful and unusual events throughout each year, all of which have a magic of their own, but this was something different for Maremma.

The celebratory tour also took these wonderful classic cars to medieval Castiglione della Pescaia, the Etruscan city of Roselle, the Uccellina Nature Reserve within the Parco Naturale della Maremma, the ENEL Geothermal Power Station at Larderello, the city of Volterra, the Island of Elba, the ruined Abbey of San Galgano, and the castello di Colle Massari.

I hope you enjoy the photos. They are not professional images by any means, but I hope they have captured for you some of the magic that was in the air that day. 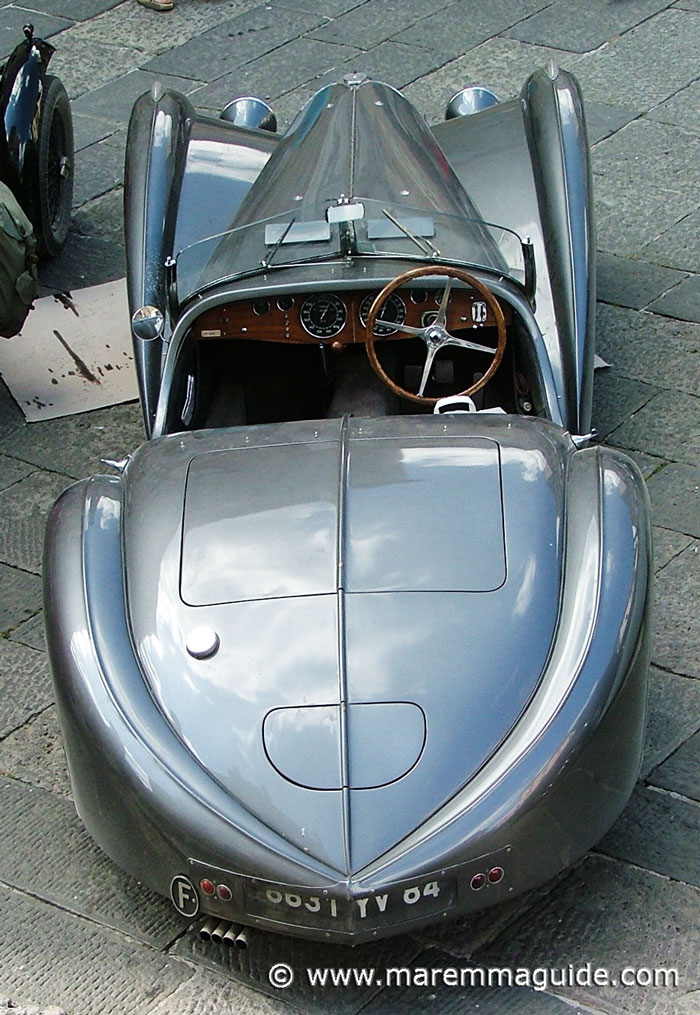 Click on each of the Bugatti car photos to view larger images. 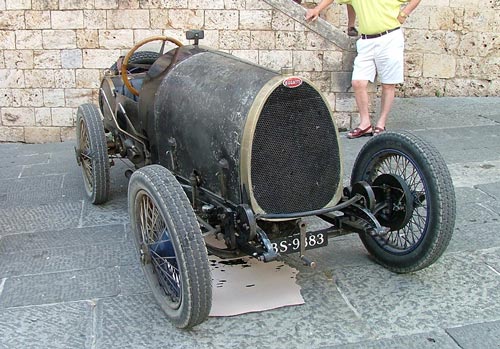