I have driven past Montemassi many times, but always on the way from Florence to the coast of the Golfo di Follonica for the weekend, and then back in the dark. The road from Florence sweeps around and down the hill on which the village sits high and proud. Until my visit this warm early March afternoon, I had never seen it in the daylight from the plain below. It was a truly wonderful sight and reminded me of a fairytale illustration. 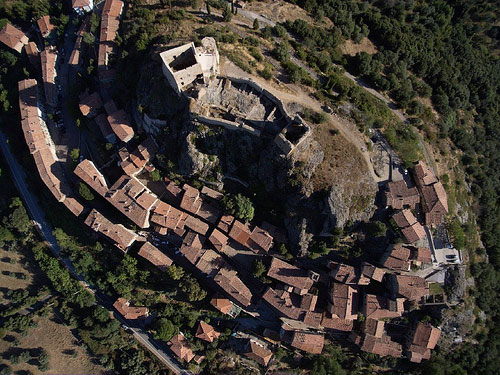 On a travel website for Italy, I have read a visitor's comments that their group was disappointed by their visit here because it was a lot smaller than they had imagined and the castle was in ruins. It is a village in rural Maremma and there are no 'great' attractions along the lines of the Uffici in Firenze, or the spectacular Piazza del Campo in Siena. 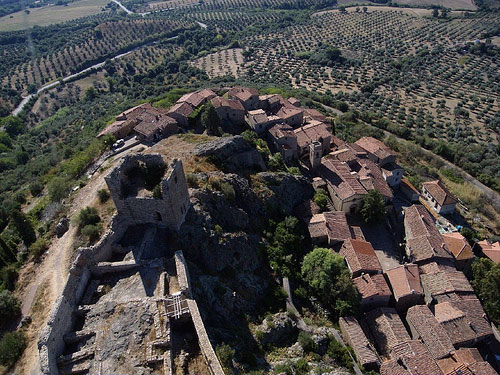 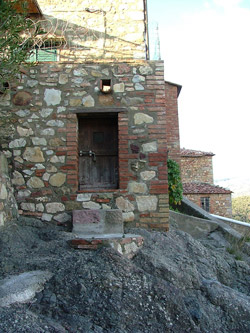 But I spent a lovely few hours wandering up and down its narrow medieval streets (TIP: wear trainers, comfortable walking shoes etc, rather than stilettos), gazing at the narrow one room deep houses...

the acute 45 degree angles of some of the buildings...

the houses built directly upon the same bed rock as the castle...

and wondering how anyone managed to stoop low enough to enter the original medieval doorways.

The allotments and gardens cultivated with care in every plot of land, no matter how small, amongst cacti and castle walls... 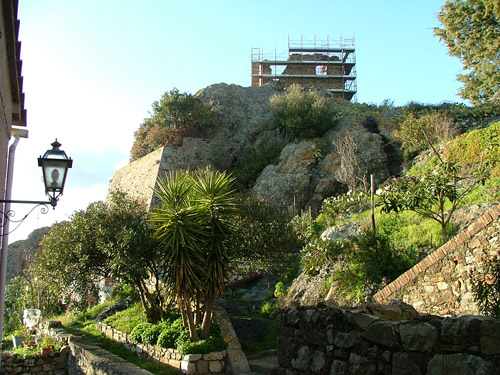 The pretty Piazza di Sant' Andrea, and Piazza Salotto with its mix of buildings, alleyways, old Barbers Shop, and what I am sure is a roll-down cinema screen on its far wall.

I am curious and will enquire whether there is an outdoor cinema during the summer months.

The old farmhouse , "vecchia fattoria", with its once impressive entrance and hidden courtyard at the end of the short "proprietà privata" (private property) driveway of Via della Fattoria.

(See the slideshow above for the photographs.)

And opposite, the captivating modern sculpture in bronze (a memorial for a local child).

Car parking next to the sculpture is free and this is a good place from which to start exploring the village.

And then there are the panoramic views... 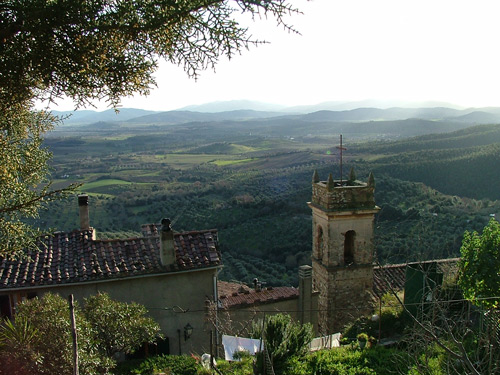 Walking at roof-top height and then turning a corner going down the twists and turns of the Salita del Castello and catching the spectacular view of the cultivated plain of the rivers Torrente Asina, Torrente Bai, Torrente Rigo and Torrente Fossa to the south-east, with olive groves and the town of Ribolla below. The church bell ringing...

And the age of the old paving stones of the part of the Salita del Castello that both traverses the length and height (remember the walking shoes tip) of the Chiesa di San'Andrea, being discussed in an earnest conversation between two retired men of the village, in terms of which are original medieval and which laid some time ago...

Spotting on successive hill tops, the medieval Tuscan hill towns of Roccastrada, Sticciano, Montepescali and Vetulonia and Tatti. And in the far distance, the Island of Elba and a snow covered Monte Amiata.

And to the north towards Florence, the wooded hills nestling one or two houses.

For me, this Maremman village with its own medieval castle and stunning scenery, is full of character and interest. 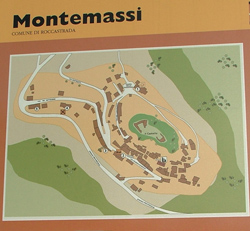 "Montemassi is situated on a moderate but steep hill in a dominant position on the high valley of the river Bruna.

By analogy with the events of the nearby castles, we can suppose that the first fortified settlement goes back to the X century even if the first evidence dates back to the second half of the XI century.

In 1328 it was property of the Aldobrandeschi and was submitted to the vassalage of the Earls Pannocchieschi; later it passed to the Republic of Siena undergoing through the years, to a long series of destruction and rebuilding.

The hamlet and the fortress... are famous in the world for appearing in the distinguished fresco showing the siege by Siena, in 1328, "Guidoriccio da Fogliano", whose attribution to Simone Martini (XV century) has being a theme of a passionate querelle.

The fresco, one of the greatest masterpiece of the gothic figurative culture in Tuscany, is preserved in the globe hall inside Palazzi Pubblico in Siena. (See below for photograph of the full fresco.)

The castle, of whom still exist two main bodies - the spurred keep with several loophole windows to the North and the tower to the South, imposes itself to the sight from afar, almost looming on the underneath road.

In the old city centre, that still preserves the appearance of a unified hamlet in the "pine" shape, we recommend the Church of Sant'Andrea, that preserves a painting of the Siena School together with a remarkable bronze bell dating back to the years immediately following the conquest by Siena."

"This church, although extensively modified be several interventions, is supposed to have once been the old castle's church recorded since 1076.

It received the rights of the parish church in the early 14th century. In 1322 it was entirely remade.

Thereafter it underwent further modifications, such as the addition of the choir and, in the second half of the 18th century, of the bell tower.

Inside, there are late-baroque altars and a painting by an artist from the circle of Matteo di Giovanni maybe Guidoccio Cozzarelli, from the last decade of the 15th century, representing a "Madonna with Holy Child".

Also there is an "Annunciation" from the late 16th century."

And then re-built during the course of the sixth century in the barocco style.

A medieval fortification (12th century) on the summit of the hill on which Montemassi resides and overlooking the centre of the village, the now restored ruin of "il casello" is an imposing sight and adds a special dimension to this lovely place. But then I have always loved exploring castles and I visit this one often as its 360 degree panoramic views are not to be missed. On most days you can have the entire castle to yourself - the Castello di Montemassi.

There is a bar in the centre of the village, opposite the church of Santa Maria delle Grazie, and one on the road outside the village - neither of which were open when I visited! But it was March. The latter advertised paninis (sandwiches). So, depending on when you plan to visit, you may wish to take some refreshments with you just in case.

I didn't come across what I understand to be the only restaurant in Montemassi, the Ristorante Enoteca Il Grottaione in Via di Corte (N.2). I saw a direction sign, but was so happy looking at the scenery I forgot to investigate further. I will just have to go back...

For those of you who like to go trekking on holiday, the "Trekking Roccastrada" route sign (opposite the bronze sculpture) quotes the trek from the village to Sassofortino as having a duration of 5 hours.

For more information on the eight hiking Trekking Roccastrada trails, the official website of the Comune of Roccastrada has with a wealth of information (in English) about the trails, fauna and flora. The route itenaries are at the bottom of the page. You may need your glasses, as the text is small and condensed! UPDATE: unfortunately these pages no longer exist in the updated Comune website.

I don't normally write about real estate that I see for sale during my travels, but if you are thinking of purchasing a home in Maremma amidst spectacular scenery (I know I use those words a lot in this Travel Guide, but for Maremma it is true), then you may be interested to know that I saw a few "vendesi" (for sale) signs, as I wandered around. 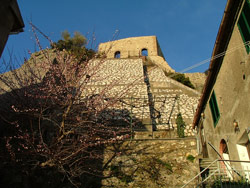 You could have the remains of a medieval castle as your close neighbour. Indeed, with some of the properties for sale in this village - which by the way is lived in and clearly cared for - so close that you could just about touch the castle from your front door or bedroom window.

In any event, the foundations of your home would be built upon the same bedrock upon which the Castello di Montemassi was carved out. Now how many people can claim that?

There is a very very special place to stay in Montemassi that will make even a die-hard unromantic swoon! Not because of any fancy frilly decorations - heaven forbid in Maremma ;) - but because the lovingly restored medieval apartments are adjacent to and extend over into the fortified walls and tower of the arched entrance "porta" - gateway - to this once impressive and important medieval city. Where knights on horse-back once rode past on their way to the castle.

And because the buildings with their layers peeled back and the dust removed tell it so. 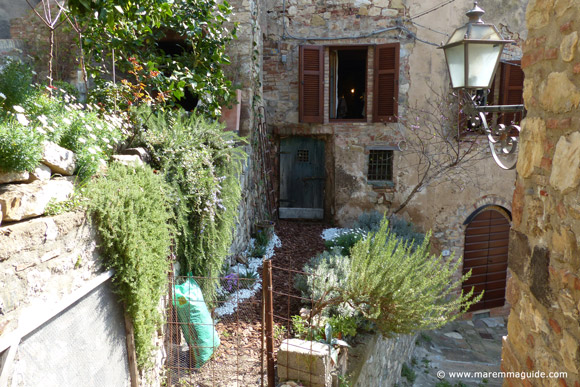 A location that is a heaven on earth for photographers and artists alike. You won't be able to move your eyes an inch in any direction and not want to photograph, or sketch, or paint what you see.

Or you could just sit and stare for hours on end with a book in hand and absorb it all whilst sipping a chilled glass of Prosecco in a tiny garden filled with flowers... Via di Corte: where dreams of Tuscany come true. Trust me, you will love it. 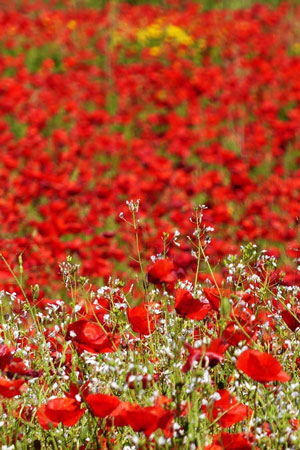