The Parco Geotermico delle Biancane is one very special place to visit in Maremma. Of all of the places and things to do that I tell my friends and family about when they are planning a visit to Maremma, this ranks high amongst them. 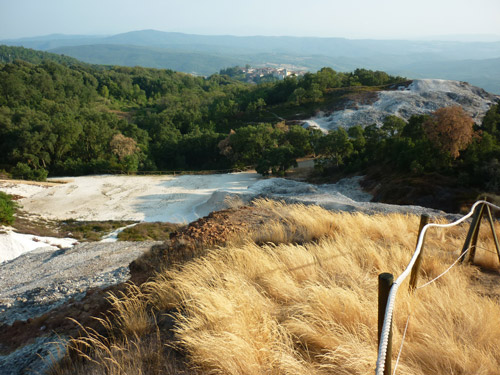 For any budding geologists or children with you who have a fascination about how the earth works, the Parco delle Biancane will be a real treat indeed. But you don't have to be interested in anything geological at all to enjoy the magic of this place: the stunning panoramic views of the medieval town of Monterotondo Marittimo and Maremma's metalliferous hills will have you standing and staring.

The heat eminating from of the land and rocks beneath your feet will have you crouching and daring to touch them.

But the colours, oh the colours of the land will have you taking photograph after photograph and send all but the hardened amateur and professional landscape photographer alike into heaven.

From the hissing of water boiling away close to the surface forming plumes of hot vapour, to the smell of suphur invading your nostrils leaving you with explaining to your children why this land smells like rotten eggs, Parco Geotermico delle Biancane will set your senses alive. 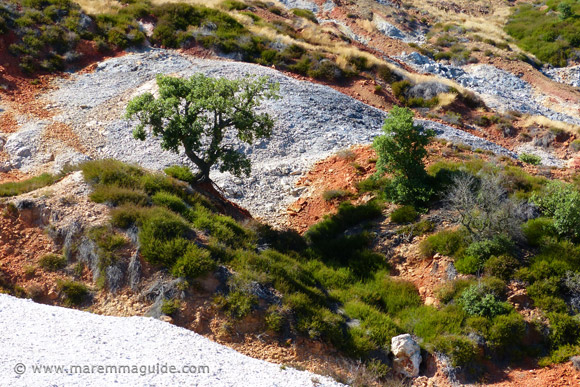 I love this place! Definitely the Tuscany you don't expect. 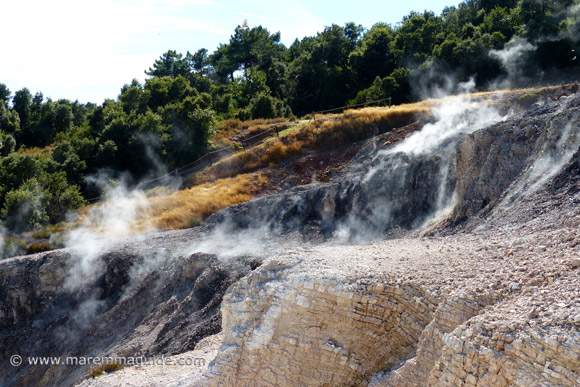 There is ample parking near the old wash-house and tourist information office, but better still - unless you are joining one of the guided walks in which case you will need to meet at the "Lagone" near the wash-house - is the car park further up the hill, past the vast cooling tower and located right at the point where the visitor trekking route begins.

Parco Geotermico delle Biancane - of simply "Le Biancane" as it is known locally - is open throughout the year and entrance is free.

There are no bars or restaurants in the park :) so take your water supplies with you. The nearest refreshment stops aren't that far away, however, along the road into and in town.

And for the mineral collectors amongst you, you might want to take a container or two for the lovely yellow sulphur deposits that you will spot. 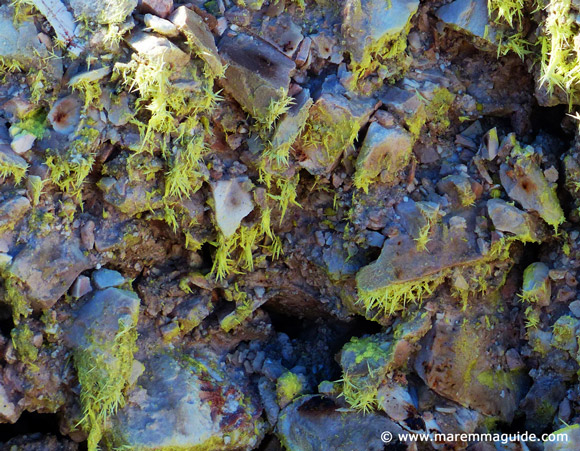 A NOTE FOR KIDS To avoid any dissappointment when you get home, you need to know that it is difficult at best to transport these particular crystals as they are very fragile. But, with a great deal of care, it can be done :) 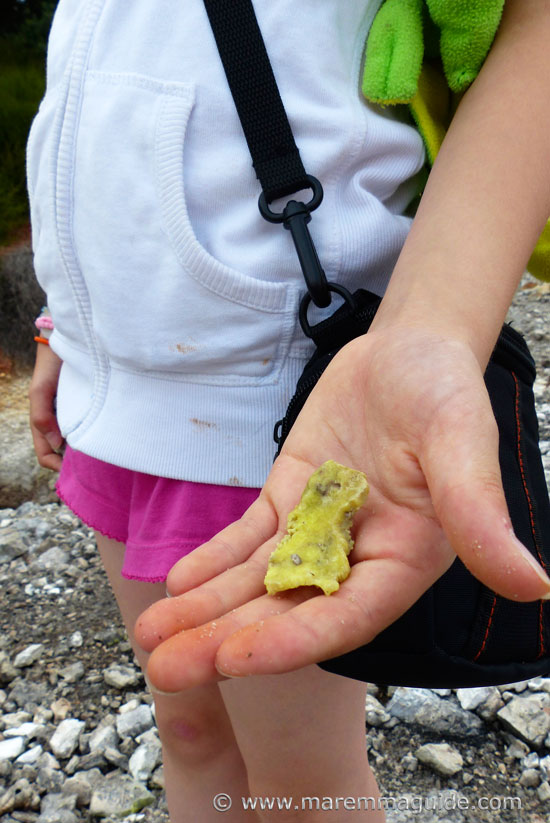 The trek through Le Biancane is indicated as about 40 minutes duration and of medium difficulty. And, having done it, I can verify that it is just that. (Now that may sound unnecessary to include here, but trust me, not all trek signs are accurate in Maremma: one particular comes to mind which said 200 metres and in fact was 2 kilometres! Enough said.) 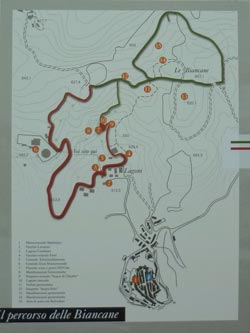 There is a pathway with rope in places along much of the distance. But for the ascent to the highest point (Point N.15) where there are two benches and a fantastic panoramic view of the park, the cooling tower, and Monterotondo Marittima below, you will need to make your own way a bit across the terrain.

Some of the trek is steep, but nothing too strenuous. The only real factor to be aware of is that both on and off the path the going is "scivoloso" - slippery underfoot, especially when descending. So ladies, don't do the Italian "due passeggiata" thing and wear your high heels here!

Guided walks in the "Fumacchi"
Every Wednesday during the months of June, July, August and September you can take a guided walk through the Parco Geotermico delle Biancane. The trek starts at 09:00 from the "Lagoni" near the old wash-house (N.3 on the map) and ends with a visit to an old "Frantoio" (cold olive oil press), with tastings of local products produced by renewable energy and the opportunity to purchase wine, olive oil and cheeses.
The adult fee is Euros 7, children and reduced rates Euros 5.
You will need to call to reserve a place on the Tuesday: tel. 0566 917039

NOTE for the hydrogen sulphide emmissions (the rotten egg smelling vapours): keep your camera lens covered when not in use as sulphur is corrosive. Although I didn't end up with a headache, my husband and little one did before we left - but then they didn't do the trek, so there must be a lesson in that somewhere!

Not far from the beginning of the route is the outlet of the "sorgente Aqua Forte" - thermal spring water - which first emerges at a temperature of about 20 degrees C on the northern slopes of Le Biancane. Number 12 on the map. It's slightly fizzy - "pizzichente" - and old folk lore has it that it is a miracle cure for indigestion and stomach problems in general, with its effectiveness being directly proportional to how much "pizzicore" (fizz) it has at any one time!

Although the waters were well known and exploited during the first years of the 1900's, they dried-up completely when the local water table lowered, only to appear again after the heavy rainfall of the autumn of 2005. I didn't see any when I visited - but it was during an extremely hot and dry August - but in any event you are advised not to drink the water as its drinkability (with regards to a safe level of bacteria content) isn't guaranteed. 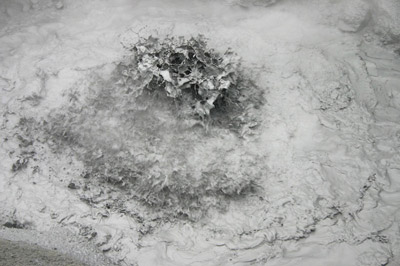 Although now much smaller than it was, at the "Lagone Naturale" (Number 10) on the lower part of the site there is a wonderful bubbling grey crater filled with thermal waters which reach temperatures of 100 to 150 degrees C, where you can take pictures like these.

NOTE: On the last two times I have visited, the lagone was dry and there wasn't a mussy bubble in sight :(

But, I did put my fingers - albeit only for a second or two - in the hot thermal stream in the same location... 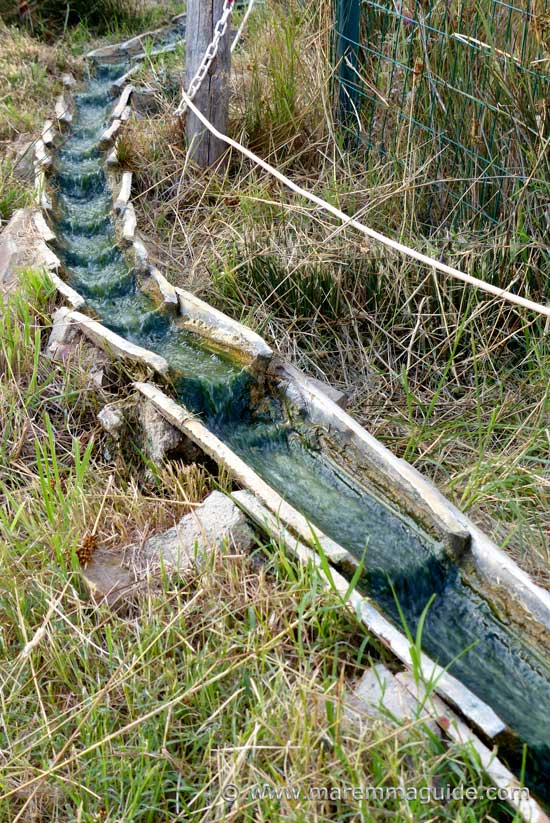 The Geothermal Energy - a little history 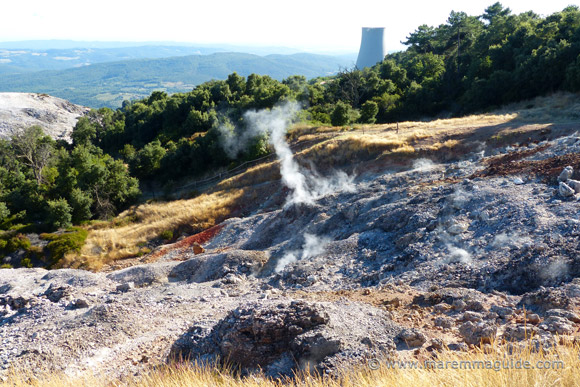 The source of the geothermal energy at Le Biancane originates from Maremma's volcanic history and the beautiful Monte Amiata (Mount Amiata). The exploration of the site started with a German called Uberto Francesco Hoefer, "Procurator of the royal drugstores" (the royal chemist) of the Grand Duke of Tuscany Pietro Leopoldo, with his discovery of boric acid in the sulphourous waters of Monterotondo in 1777.

Hoefer began extraction of the boric acid at "Lagone Cerchiaio" (the pool marked Number 3 on the map), which takes its name from the local early middle ages tradition of using the boiling water found there to curve chestnut branches to make barrel hoops. He would have used it for the treatment of skin, liver and kidney diseases, wounds, arthritus, muscle pain and to cure female sterility.

Industrial production of boric acid started in 1812 by the company Brouzet-Guerrazzi of Monterotondo, who became the largest producer in Europe. Additional factories and support infrastructure were subsequently built in and around Monterotondo Marittima by the succeeding firm De Larderel, of which the old wash-house (see below) was one.

Exploration activity to find new geothermal chambers started in 1828, with the first discovery made twelve years later, in 1840, with three holes each "sette braccia toscane" of seven Tuscan arms deep! in the locality of Forte Mortina.

Twenty-four years later still, in 1904 at Larderello near Pomarance, Prince Piero Ginori Conti, used geothermal vapour to produce electricity for the very first time and from that day the industrial production of boric acid at Le Biancane is supplanted by that of electricity.

Today, the electricity produced by the company ENEL at Monterotondo Marittima supplies five hundred local homes with central heating and 70% of the needs of the electricty of the whole of Maremma Grossetana: more than 19,000 households.

The geothermal power plant and cooling tower that you can see in the above photograph was built in 1958 and modernised in 2002. 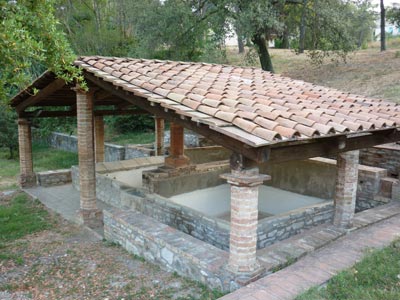 The wash-house at the beginning of the Parco Geotermico delle Biancane is located next to the small tourist information office and was built by the Larderello company for its workers in the 1930's. The hot water piped there came entirely from a local natural source. The octagonal bricks within its support columns are a characteristic of this part of Maremma and were fired at the Vecchienne furnace (which closed in the 1950's). 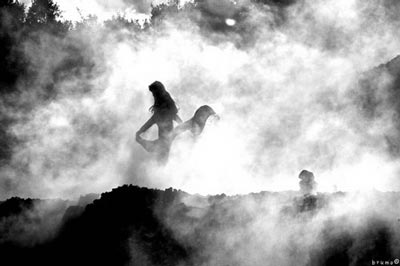 In the late middle ages little was understood about the rising white vapours and strange landscape. And, although these meralliferous hills were actively mined for minerals, they were nonetheless covered with dark, thick woodlands and largely uninhabited.

It is in this local context after the Black Death has taken its terrible toll, poverty is rife as a result of decimated annual harvests, when local noble and political rule continually and bloodily changes between Firenze, Siena, Pisa and the Pope, that the witchhunts reached nearby castled Travale in Maremma. The year is 1423 and the young woman's name was Elena di Travale...

Places to stay nearby

There is a lovely Tuscany farmhouse with apartments nearby just down the road towards Suvereto where you can relax and unwind with dip in a very special swimming pool, take yoga class, or a course in Italian ceramics, and much more. Totally immersed in the countryside the only night life here is the stars.