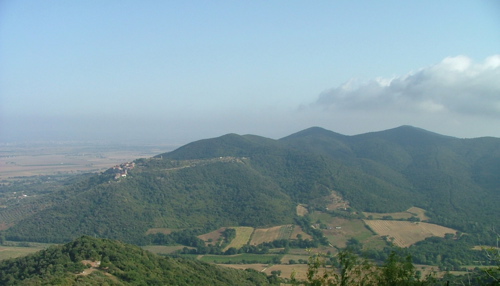 The formal description. La Maremma Grossetana is the largest of the three parts of Maremma and constitutes the territory within the Province of Grosseto. Historically, it is also known as Maremma senese because it once fell under the control of a much larger Republic of Siena.

Its coastal boundary extends from its northern point at Prato Ranieri, where it meets Maremma Livornese, along the Gulf of Follonica to the peninsular at Punta Ala.

Then south past Castiglione della Pescaia, Grosseto and its marina, along the Silver Coast (Costa D'Argento) from the Alberese marina (Marina di Alberese) to Talamone and Monte Argentario. Taking in the Orbetello lagoon (laguna di Orbetello) and the coastal Burano lake (lago di Burano), until it reaches the border with both Maremma Laziale and the Province of Viterbo at Chiarone Scalo.

Then further south into the Tufo towns in the heart of the hills of the River Fiora (Colline del Fiora), finally reaching the border with the Provinces of Viterbo and Rome, and the Regione of Lazio in the mountainous area of Monte Amiata.

And the informal... This central part of Maremma is comprised of wonderfully diverse natural environments, each a natural park and wildlife reserve in their own right.

It has stunning scenery of thickly wooded rolling hills, home to wild boar, deer and wolves... overlooking beautiful coastal plains that stretch as far as the eye can see and turn shades of pink and orange in the setting sun... and the beautiful and imposing volcanic cone of Monte Amiata - the Amiata mountain within the Tuscan Antiapennines - rising to 1,738 metres high, whose depths provide the source of heat for this lands famous "terme" - thermal springs and baths.

The hill tops of Maremma Grossetana are capped with unspoilt medieval towns and villages, some of which appear little changed apart from the occasional visible electricity line and leave you pondering the austerity of a life living off the land or mining not so long past.

And then there is the spectacular coast hosting the finest beaches in Italy - Cala Violina taking premier position.

If you take the 20 minute trek through the pine woods and down the steep paths to the beach, you will instantly understand why... and the sands play the sound of a violin as you walk across them (go before high summer to experience this beautiful spot at its best).

At the southern most part of this coast, the white sands turn dark grey and then black with the iron content.

And if that was not enough, laid out in front of you in the sparkling emerald green and turquoise waters of the Mar Tirreno (Tyrrhenian Sea), are the southern islands of the Tuscan archipelago - Elba, Montecristo, the Formiche di Grosseto (Ants of Grosseto), Giglio and Giannutri. From the beaches of Follonica you can often readily make out the white hilltop towns on the island of Elba.

The Inland Hills of Maremma Grossetana

These hills border the Province of Siena and occupy the land between the Monte Amiata and the Maremma plain. A beautiful landscape with walled medieval towns, where the Etruscan initiation of the cultivation of vineyards continues today with the production from Sangiovese grapes of the famous DOC Morellino wine.

The Metalliferous Hills and Gulf of Follonica

The Metalliferous Hills of Maremma Grossetana originate in the mountainous zone of the Cornate di Gerfalco and slope down to the Gulf of Follonica. It is a diverse landscape of thick oak woods and scrub in the interior and pine woods along a coast of fine white sandy beaches.

The natural beauty of this land apart, it is for its rich mineral deposits and mining history for which it is renowned. In Etruscan times, there was great wealth to be had from the extraction of precious and semi-precious minerals and the smelting of vast quantities of iron ore transported from the island of Elba. To recent modern day, the main living from these Colline di Metallifere has been the mining industry. The colours of the landscape here tell of its mineral riches, with flame red and chestnut coloured tilled soil, and spectacular burnt red water erosion features.

Its geological interest continues with the deep geothermal steam boric acid fumaroles - "soffioni boracifieri" - at Monterotondo Marittimo and Travale. The resources of which have been explored and exploited for renewable energy since the beginning of the last century.

At its heart is the important and stunning town of Massa Marittima, with spectacular views across the coastal plain down to the beaches at Follonica and thence, across the Tyrrhenian Sea to islands of Elba and Montecristo. This is my favorite Maremman town... stop a while and watch the sun set over the landscape in which this medieval hilltop town sits and you may be hard pressed to diasagree! 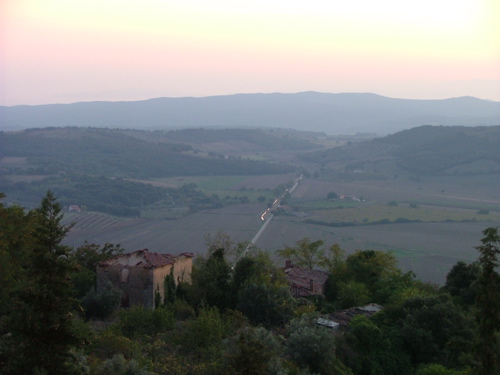 Here in the heart of Maremma Grossetana is the provincial town of Grossetto, with its impressive 16th Century Medicean century fortress style walls.

The old medieval part of Castiglione della Pescaia sits up high overlooking its port below, the vast stretch of blue sea with surfs that attract multi-national windsurfers, and the coastal plains for as far as the eye can see. Along with the millionaires yachting port at Punta Ala and the pine backed white beaches of the Marina di Grossetto, Castiglione della Pescaia is a popular tourist location.

The geography of this part of Maremma Grossetana is dominated by its volcanic past: a vast and hilly land lying in the heart of the Colline del Fiora - the hills of the River Fiora - with towns carved into and out of the "tufo" - tuff - consolidated volcanic ash rock. Its deep geology still fuels hot thermal waters and sulphur baths.

It has a rich Etruscan history, with many settlements along the hills, over 6,000 tombs - hundreds with frescoes, and a necropolis carved into the rocks.

The spectacular Silver Coast is situated south of Grosseto and bordered by the Uccellina Hills and Lake Burano. Its name derives from Monte Argentario, an island with a rocky coastline rising from the sea. Now connected to the the mainland by two sand banks, Monte Argentario is a very fashionable resort attracting the famous in Italy, with fishing villages of Porto Santo Stefano and Porto Ercole as its main attractions.

Here you will find the lagoon at Orbetello and the island of Giglio and the smaller Giannutri.